Just eight miles south of the Mason Dixon Line is Port Deposit, a little town of about 800 people jammed between the Susquehanna River and solid granite cliffs. But current population numbers are deceiving.

In 1900, the population was roaring with 4,000 with commercial sailors and merchants crowding the Susquehanna River’s eastern shore. During the Korean War, it would have been the largest city in Cecil County, when 58,000 sailors were camped here for Naval training. 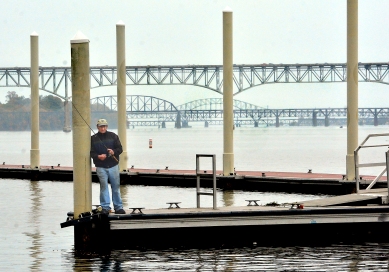 Town officials are predicting a return to prosperity because of residential reuse of the training station land. A new generation of home buyers is moving in, including those interested in one of the snazzy 110 waterfront condominiums.

Outside of the area, Port Deposit is often ignored and mentioned only when the river floods. Hurricane Agnes, of course, is spoken only in cursed tones, when residents remember flooded homes and when the water finally receded, leaving two or three feet of mud inside. And there have been other disasters; including when chunks of river ice pushed onto and over the banks near the railroad tracks, and floods in 1996 and again in 2011.

The wealthy Tome family built two schools in Port Deposit. Tome School for Boys was 200 feet above the town on a bluff, begun in 1901. The buildings were mostly made of granite from nearby quarries, and it thrived until 1942 when the U.S. Navy made it the Bainbridge Naval Training Center. With the center came a camp full of sailors, once again making Port Deposit a booming place.

Jacob Tome was born near Hanover, York County, and migrated ‘penniless’ according to one source, to Port Deposit. When he died in 1898, he was worth an estimated $88 million, his massive fortune made from lumber and railroads.  He was Maryland’s first millionaire and one of the richest men in the U.S. He was a state senator and ran for Maryland governor. After his death, his widow began the Tome School for Boys.

In 1984, Wiley Manufacturing Company closed its doors here, crippling the local economy and leaving hundreds of workers without jobs. Wiley was most famous for manufacturing the tubes that became the  Baltimore Harbor Tunnel. Residents still tell stories about the tubes being floated downriver to the tunnel site.

There have been plenty of ups and downs, but Port Deposit is still a picturesque place with scores of beautiful historic buildings. Tome’s Carriage House is now used as a special events venue, and Tome’s Gas House is a visitor center. The first Tome school sat across the street from the Tome mansion which was torn down in 1948. Only an archway remains of the school, the faces of Jacob and Evalyn Tome etched in stone, looking down on South Main Street.

Port Deposit is about an 80-minute drive or 51 miles from York. Take state Route 74 to U.S. Route 1 north across the Susquehanna River, then drive south on state Route 222 to Port Deposit.  A word of caution: Speeders through town are not tolerated.

During this time of year, Port Deposit is quiet. Lee’s Landing, a rocking restaurant with palm trees, thatched roofs and true beach sand shuts down when cold weather sets in, and motorcycles generally leave until March.  Some boats buzz up and down the Susquehanna and a few hardy fishermen are still feeding rockfish– ‘eels are rockfish candy’ it’s been explained–  along the Lower Susquehanna Heritage Greenway or from the marina docks.

The town hosts a cell phone tour. Signs throughout town show the phone number and a number which corresponds to a building or area.

Winter closes the visitor center until May, but the Bainbridge Naval Training Center Historical Museum remains open until December in a bank building downtown. And here, visitors discover an entirely hidden side of Port Deposit. Uniforms, flags, photographs and other memorabilia are on display, illustrating how the town and the training center shared this section of the river.

The school/training center sat quietly above the town, unseen.  Tome’s School for Boys had been struggling and was looking for a buyer when the U.S. Government came calling in 1942.

Shortly after, the Navy took over the school buildings and established the Bainbridge Naval Training Center on its 1,200 acres. The Navy trained sailors for both World War II and the Korean Conflict. Activity slowed to a crawl and in 1976, the last sailor left Bainbridge.

Although the property is fenced off with barbed wire, many of the abandoned buildings have been burned by arsonists, including the Memorial Hill building three years ago. The entrances are locked and signs are posted, but trespassers are common.

Back down the bluffs and along the river, a few restaurants do well by marketing the quaintness of the town, the views, and its out-of-the-way location. BackFin Blues Restaurant, Granite Run Taproom, and D’lorenzo’s Pizza and Grill remain open and enjoy strong reviews from travel sites. The Lower Susquehanna Heritage Greenway reaches 12 miles from the Conowingo Dam, through Port Deposit, to the Chesapeake Bay.

Because Port Deposit is squeezed for land, only one street snakes between the river and the bluffs. Town officials are betting that reusing the Tome School/Bainbridge site for additional residential and commercial space will return Port Deposit to its former economic boom years.