Kolton Grim can easily be lost behind the behemoth Angus cattle he and his family show. In fact, even the big black cowboy hat he wears makes him look a little top heavy. His dusty cowboy boots are his anchor.

But this quiet, bespeckled cowboy might fool you. In his first year showing at the Pennsylvania State Farm Show Monday, he won third prize showing Ella, who weighs about 930 pounds more than he does. 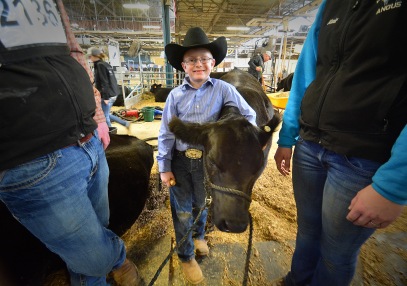 Kolton is only eight years old, but he leads around his family’s Beaver Creek Angus like they are puppies. An Angus bull can weigh 2,000 pounds or more than half of a Volkswagen bug. Angus have a reputation, true or not, of being rather cantankerous beasts. It wouldn’t take much for one to toss this Paradise Elementary School third-grader into the arena’s cheap seats.

Kolton had other plans. He and Ella, a ‘baby’ Angus, won third place.

The Pennsylvania State Farm Show is the largest indoor agricultural show in the country, covering about 24 acres, or about 18.5 football fields. The show features everything ‘ag’, that is, farming fields, to marketing, thousands of animals (cows, rabbits, chickens, ducks, sheep, etc.), a Food Court featuring nearly any food source grown in the state (mushrooms, pork, potatoes, maple sugar, beef, corn, etc.), special shows like square dancing and the high school rodeo. About a half million city dwellers, farmers and suburbanites visit the show every year– for free.

Kolton ‘persuades’ Ella to follow him to the ring.

But while Kolton showed for the first time this year– he was too young before– he’s been here a lot. His family’s Beaver Creek Angus farm has shown here for nearly 20 years, his father Kyle Grim first showing in the last century. His mother Kait joined the fun later, and even Kolton’s firecracker little sister, five-year-old Kinleigh is part of the show.

Kolton is in charge of Ella, a year-old Angus heifer. He bathes and feeds her, takes care of her and expects great things from the 1,000-pound ‘baby’. At Sunday’s show, Kolton trotted out Ella to be near Scaara #687 during judging. Scaara is a BIG cow, with a big name and a big reputation now that she won the supreme grand champion ribbon– a very big deal in the livestock world. She is the best cow of all the breeds at the Farm Show. 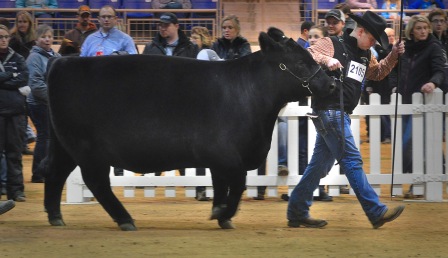 It was the first time Beaver Creek Angus, and Tomahawk Cattle Company have won such a prestigious award.

Prior to Scaara’s judging, Kolton cleaned up Ella in the wash house.  He scrubbed her down with Dawn detergent, squeegeed off her coat, and then blow-dried her for a manicured look.

After a cleanup, Kolton led Ella back to the farm’s pens, through a Monday afternoon crowd of families and state Future Farmers of America who were intent on seeing the newest stars. But Kolton, Kinleigh, and a dozen cousins weren’t to be found here. They had already picked sides and were playing a quasi-football game in the milking area.

Playing football with a cousin in the milking chute.