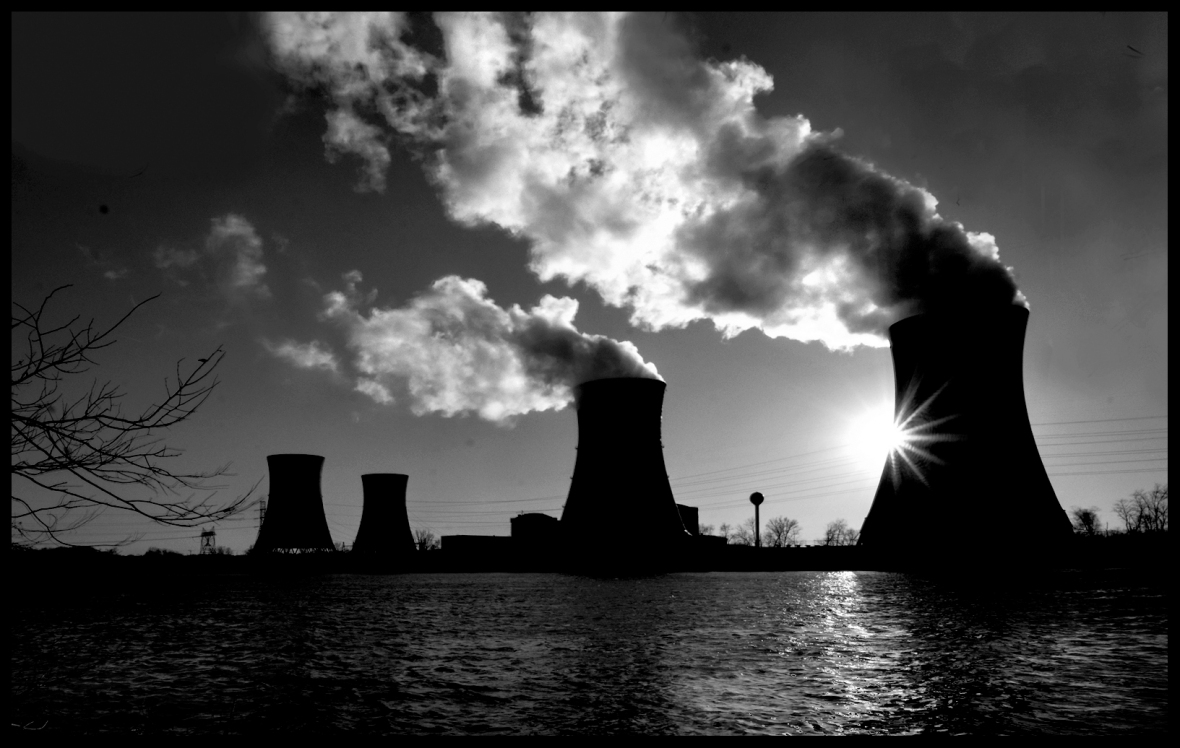 The current view of Three Mile Island doesn’t look much different than the 1979 view (below), except that Unit 1 is steaming. Unit 2 is commercially dead.

Sound sleep was shattered when the phone rang on that morning in 1979.  I had been employed by the York Daily Record (YDR) for only three months, but calls at all times of the day were nothing unusual and almost anticipated. It was the job.

A YDR series critical of the  Three Mile Island nuclear power plant two weeks earlier had stirred up the population. From ‘thank you’ to ‘pinko propagandists’– we heard it all. Reporter Jim Hill’s series pointed out TMI’s weaknesses. The plant is just 13 miles from downtown York, and posed a danger to the York population. This reactor had been in commercial operation for less than three months when the phone took me away from a peaceful dream of mountain vacations.

It was YDR publisher David Martens. As much as I enjoyed working and talking with Dave, a call from him at 7:30 a.m. was probably not a good thing.

“There’s been an accident at TMI,” he said.

I was only half awake, and not thinking clearly. “Ha,” is all I could say. “That’s funny.” Surely he’s joking. Hill’s meticulously researched series, which was later nominated for the Pulitzer Prize, spoke about the possibility of a nuclear disaster. A true catastrophe two weeks after Jim’s series was incredible. Dave wouldn’t make light about something as serious as a possible nuclear meltdown. 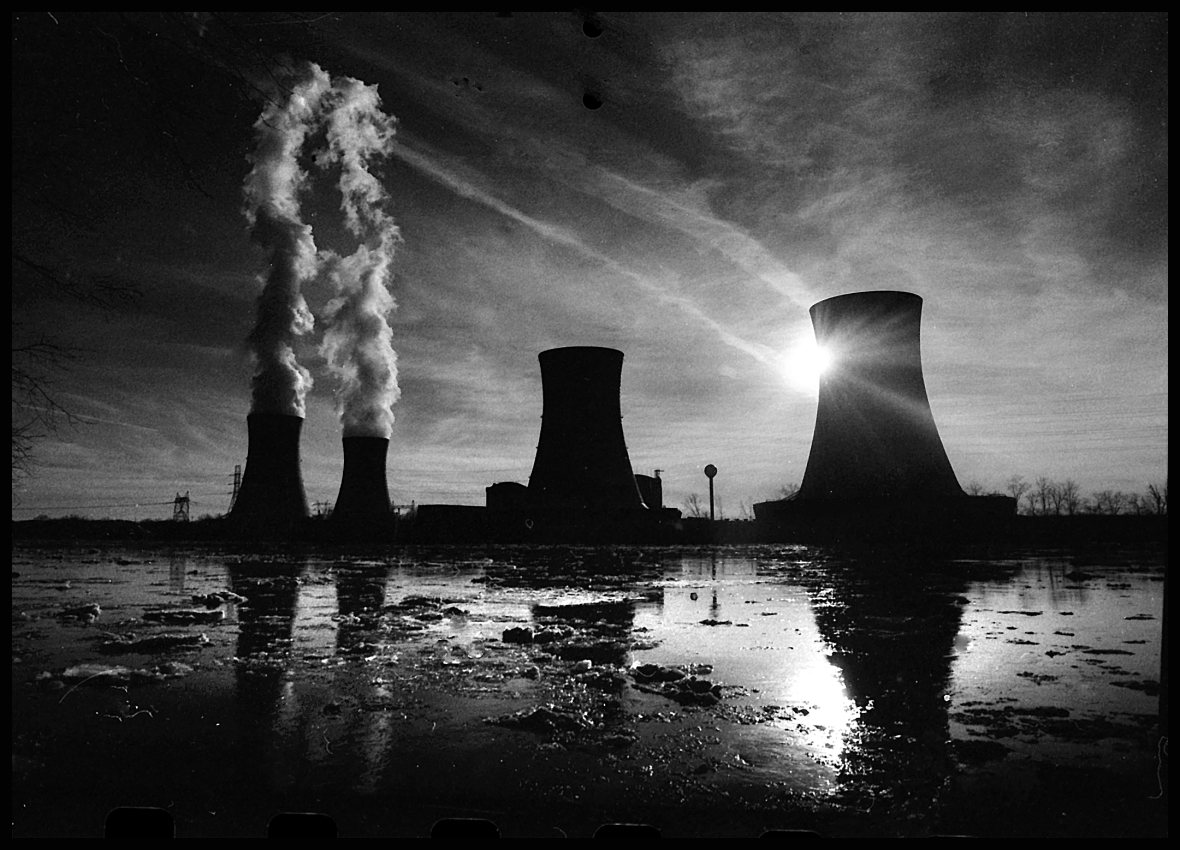 Unit 1 was shut down for refueling when the TMI accident occurred in 1979. Unit 2, at left, had been in service for only about three months.

And suddenly, that’s exactly where we were on that Wednesday morning, March 28, 1979.

Just two days earlier, Walter M. Creitz, president of the Metropolitan Edison Company, the plant’s owner‐operator, charged that the paper had made “unrealistic assumptions” that were “tantamount to yelling ‘Fire’ in a crowded theater when there is no fire.”

What’s more, Ronald L. Harper of the Philadelphia Electric Company said the series used “melodramatic distortion of the facts to sell the story.”

Jim and I and a handful of other media had toured the other, less famous reactor, TMI-1 — it was shut down for refueling — prior to the series to get a feeling of equipment and machinery for the series. It was an interesting day with all-white safety suits, radiation meters.

For an excellent overall, years-later look at TMI’s accident, check out the Smithsonian National Museum of American history here.

Today, forty years later, citing financial losses, owner Exelon says Unit 1 will close in September. Most nuclear material has been removed from Unit 2. About 100 tons of damaged radioactive fuel from there was put into 342 canisters. They were shipped to the Idaho National Laboratory and stored in concrete containers.

A film script couldn’t have been better written to stamp Jim Hill’s series with credibility. In fact, just 12 days before the accident, The China Syndrome film was released, telling how a damaged nuclear reactor could hypothetically melt to China. “”The China Syndrome” is a terrific thriller that incidentally raises the most unsettling questions about how safe nuclear power plants really are,” said critic Roger Ebert.

He gave the movie a five-star review.

So, on that morning, every available York Daily Record reporter and photographer headed up to TMI (in the middle of the Susquehanna River and about 13 miles away) to report and photograph the world’s most serious commercial nuclear accident up to then. In 1986, Chernobyl‘s nuclear plant explosion killed at least 30 people in Ukraine. Strangely, in 2011, it became a tourist attraction.

Also in 2011, Fukushima, Japan’s disaster was caused by a tsunami, which led to meltdowns in three reactors. One source says 174,000 people have not been able to return to their homes. Cleanup is expected to cost $200 billion. And, there’s radioactive tuna, 1,600 deaths due to evacuation procedures…

Because of Chernobyl and Fukushima, TMI has lost some historical curiosity value. No one died; there were no explosions. It’s very likely that many York Countians don’t know about their brush with history.  It has, after all, been 40 years.

On that morning in 1979, route 441 along the Susquehanna River wasn’t any busier than normal. People trying to get to Harrisburg for work were surprised to see a handful of media vehicles at the TMI site. They turned on the radio to hear the news. Kind of. 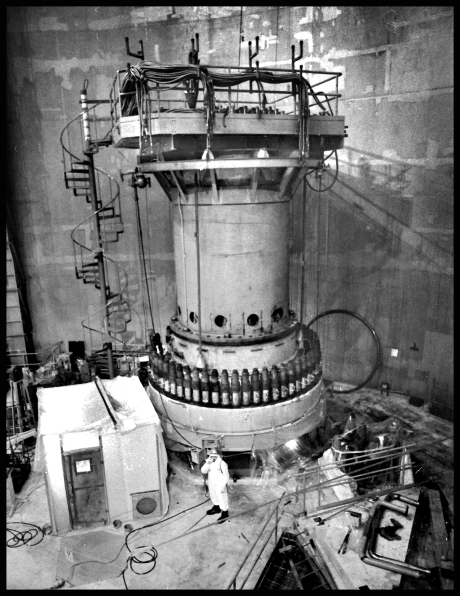 Prior to the accident, reporter Jim Hill toured Unit 1 that was shut down for refueling. Two weeks after his series which pointed out problems, Unit 2 nearly melted down.

The accident began at 4 a.m. that day. A ‘relatively minor malfunction in the secondary cooling circuit’, according to the World Nuclear Organization,  became a near disaster when the nuclear fuel couldn’t be controlled. About 7:30 a.m. a general emergency was announced, saying this incident has “potential for serious radiological consequences” to the public.

But that’s all we knew. That is, that’s all the media knew and therefore, the public. No one was talking. That alone is what conjured up all kinds of scary disaster stories. It’s estimated that 140,000 people packed their bags and left town, especially expectant mothers and young families.

“I was pretty much sure we were going to be eviscerated, but we had to get the story,” says Kathy Duncan, who was the YDR city editor at the time. “I wanted Dale (husband) to take the dog to Baltimore, and I’ll get there when I can. When we first heard about the accident, there was plenty of fear, laced with satisfaction that Jim’s stories were validated.”

The next day– yes, a full day later– Lt. Governor William Scranton tried to reassure his public, saying he was told everything was under control. Later in the day, TMI’s story changed, as did Scranton’s, when he said the situation was “more complex than the company first led us to believe.” It just heightened the nervousness. When an official finally spoke, it was in double talk, saying we witnessed an “abnormal evolution”, or “reactor excursion” or “transient event”. Only when President Jimmy Carter showed up did information start flowing and nerves relax.

Record reporter Linda Seligson, for one, was scrambling for information, trying to keep the public informed about the emergency. Talk on the street was of explosions, meltdowns and contaminated water for a century. One off-site scientist theorized a giant bubble was growing inside the containment building that would rupture the walls and deadly radiation would spew throughout the area.

Residents in York County’s Goldsboro have a front-row view of the TMI towers, and most residents left town. The square was even quieter than usual, but the boro’s general store stayed open.

It’s difficult to calm readers’ nerves when few experts were willing to talk, and the ones that did were suspect for one reason or another.  Linda and I wandered through the area, sometimes at a loss to write or photograph anything. The four imposing cooling towers still stood high over the river, like skyscrapers above the Susquehanna River, just as they did last year. And the year before. 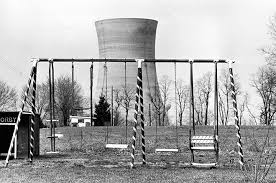 Reporters and photographers scrambled to find something– anything– to illustrate the accident. Even the national services turned to scenes like this.

It was a media challenge. At other news scenes, people will talk, sometimes even looking for a reporter to talk with, to unload onto. A photographer can shoot the downed trees, flooded streets, firefighters pouring water or backed-up traffic.

But not here. We were stranded in the middle of a disaster without much to do. And not knowing how bad it was or was going to be. National network news helicopters will land on the Goldsboro baseball field in the next few days– TV reporters were interviewing other TV reporters.

Before racing out the door, Managing editor Wiley Brooks told Linda “Don’t worry. We wouldn’t send you anywhere it wasn’t safe.” Linda and I were on the scene when it was later reported that peak radiation release was at 11 a.m. Again, no one knew that at the time.

“I have frightening memories of a strong metallic taste in my mouth — not knowing what that taste meant at the time,” she says. “And how we ended up at a bar so I could get a Coke to get rid of that taste.”

While the official report from the Nuclear Regulatory Commission says “questions were raised about possible adverse effects from radiation on human, animal, and plant life in the TMI area, none could be directly correlated to the accident.” But some people would disagree, among them “Surviving another day, The Three Mile Island Citizens Survivors’ Group” and “Three Mile Island Survivors“, both Facebook sites.

“Penn State Hershey did a molecular study and is now linking the nuclear accident at TMI to some thyroid cancer cases,” says one post. ” They had metallic tastes and/or smelled metal during the partial meltdown at TMI.”

While Facebook posts continue to expose health issues (true or false), the towers will remain, four gigantic reminders of that day, March 28, 1979.

As a former member of the media that day, I’m sorry we could not get information to the public earlier. As individuals, we were in the same uncertain position you were, worried about what may have happened in the next minute or hour.  As media, we didn’t have the choice to leave.

At lunch recently, I was talking with a friend who was working at TMI that day.